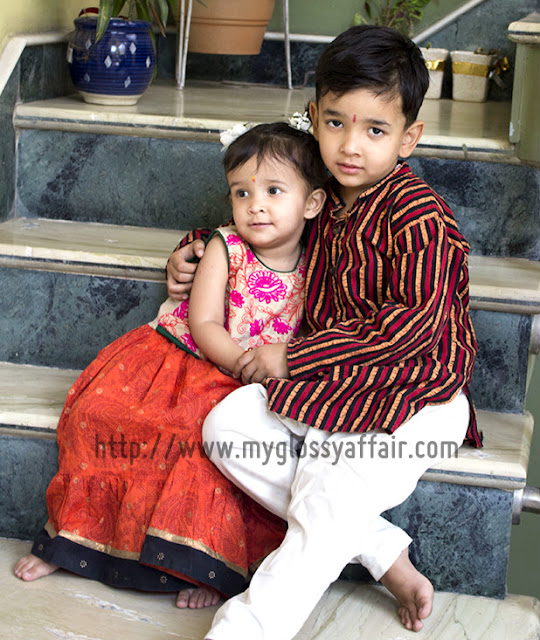 Atharva & Sehar
I wanted to write this post for long but somehow, time didn’t allow me. Almost 7 months have passed.
My son’s Injury very close to eye –
My elder son, Atharva, got hurt while playing and injured his eye area too badly. Thankfully, his eye was perfectly fine. But one little lump was there below eye brow so I took him to Ophthalmologist for eye and retina checkup. There was thankfully no serious injury in the eye or anywhere and he prescribed some medicines for that lump to dissolve. But, what made my world go round was the fact that his eyes were weak, too weak. Yes. Computer testing show a cylindrical power of 3.5 in both eyes.
The Culprit –
TV-No, Mobile -No, Tab- No. Nothing. It was by birth according to doctor. This was not actually weakness of eyes but a defect sort of thing. I cried there, I cried in car. I cried for 2 days but nothing could be done. We had to believe it that it is a permanent sort of thing now. He has to going to wear spectacles all the time. Though number was not given and we were free for a week. Atharva too cried as he has never liked the sight of spectacles ever. He was never fond of picking specs of even elders.
Eye Testing Time –
Ok, again doctor called us in a week’s time when that lump will dissolve and the doctor can do proper eye test, dilating and all. We went to him in a week and there came Atharva’s turn of reading alphabets.

4th line – Not visible properly. But he could make out that line with help of glasses. But 5th line was not at all visible. Not even with glasses of 15, 2, 2.5 or even 3.5 power.
So, doctor decided to give him a power of 2.25 to start with, which is heavy but obviously less than computerised 3.5. He informed that the power will be increased gradually not to strain the kid too much. His vision was mere 6/24. Correct vision is 6/6.
To make you understand this, means, his focus is not proper. His eyes have some problem by birth but to see things properly, he strained his eye muscles to see properly and now, his eyes have adjusted to that. With glasses, there is not much difference in his vision, but constant wearing of glasses will reduce the strain on eye muscles that could have got weak over time causing more troubles.
Ufffffff. So much to understand and that too for my little baby. What broke me what his constant saying that I will eat whatever you will say, carrot, lentils anything. Just don’t make me wear glasses. He cried.
Having a power was another thing but not being able to see with glasses too was another. That came as a shock and more crying sessions. We got him glasses of his choice. Two of them.
He didn’t wear glasses constantly –
Why!! Because they didn’t make much of a difference in his vision. He only wore them in school regularly. Thanks to his mam.
6 months passed.
Again checkup time. His power was going to be increased this time. And hopefully his vision too.
Checkup after 6 months –
He was now able to read 5 line a bit but with his glasses. His vision is now 6/18. Its better than before but not considerably. The doctor said that he must not have worn the glasses full time which is correct. But since he doesn’t feel much difference and I am not at home in day time, nobody is there to push him.
When he listened to the conversation between me and doctor, he agreed to wear glasses more frequently. And he is now adhering to his promise.We are again due to go there within 3 months so that correct no. may be given to him.What makes me sad is that he concluded from the conversation between me and doc that if he wears regularly, the glasses will go forever. The innocent soul doesn’t know that it is forever and right now, his power is going to increase only :(.

His class teacher is making him sit in front desk, middle row with another kid who wears specs. No seat rotations, nothing and his friend of last 2 years is now not able to sit with him. This makes both the boys sad, too sad.

Atharva said to his friend, “Don’t worry. I am now wearing specs regularly. Few more days and my eyes will become perfect and no more specs then. Then, we will always sit together”.

My heart breaks but nothing can be done.

Now, I come to know that there are so many kids with this problem, too many. Shape defect is more common than weakness of eyes. And hence, so many little kids we see wearing specs. We don’t come to know of such things till we ourselves face it.

I just pray to God for all kids. God bless all!!

Boys will be boys!!